Roses in the vineyard: Beautiful and really useful 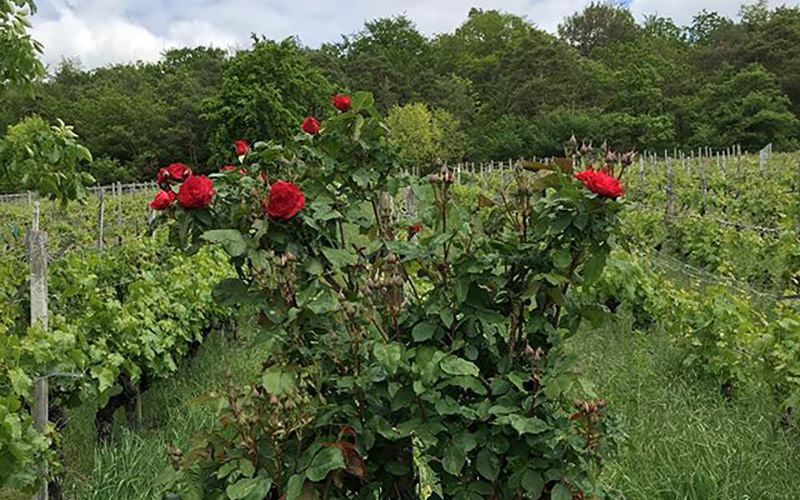 In summer, flowering roses are a real feast for the eyes in our vineyards. However, they are not planted for the delight of flower lovers, but rather as indirect protection for the vines. They indicate the danger of mildew.

It is hard to say what I prefer: the vineyards in spring, when the first greenery decorates the vines? In May and June when the vines are in bloom? In late summer, when the grapes are fully ripe and hanging from the vines – just before the harvest?

Our vineyards really do have their own charm all year round. For me, however, there is a very special time in the vineyard: I particularly like to roam between the vines when the roses bloom there in June and July. They stand at the beginning and end of many rows of vines and they are simply a delight for the senses – in red and pink, in yellow and white.

The wisdom of nature

However, our winegrowers do not plant the rose bushes for the pleasure of the walkers. They use the wisdom of nature – through the flower, so to speak. Grapevine and rose are susceptible to the same diseases and pests. The roses are much more sensitive than the robust grapes. As so-called indicator plants, they show symptoms much earlier than the vine when infested. For example, while the wine still breeds when infested with mildew, the delicate rose already shows clear signs of attack. The white coating on the rose petal is an indication of infestation and allows the winegrowers to react in time and take appropriate countermeasures to save their vines and ultimately their harvest and wine.

For biodiversity and wise guys

By the way, monks in the French Burgundy region discovered this informative value of roses: as early as the middle of the 19th century, they recognized that roses near vines showed symptoms of fungal infestation long before the vines. Today, many winegrowers match the colours of the roses with the wine: red roses to red grapes, light roses to white wine – perfect for know-it-alls who can already tell in early summer which colour the grapes will develop in which line.
By the way, the rose bushes also support the diversity of species in our vineyards. They serve bees and other insects as a source of food and shelter. In addition, their roots hold the soil together at the edge of the vine rows, thus counteracting erosion in the vineyard.