Winter in the Vineyard 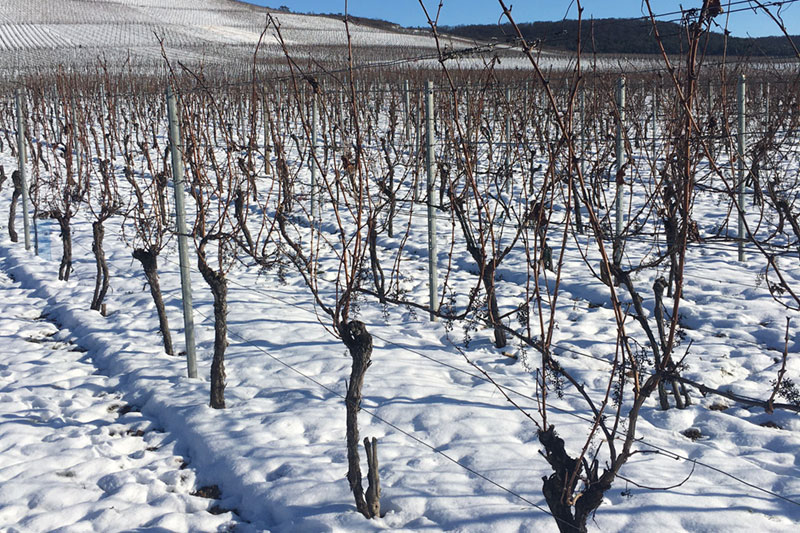 In the winter, the vineyard rests. The vines enjoy this ‘downtime’ as the previous year’s vintage matures patiently in the barrels. Most of the work takes place in the cellar. But for the majority of winegrowers, it all starts again in January or February. The next season is knocking on the door and work in the vineyard begins. It is time to prune the vines.

Quality Assurance of the Gapevines

Pruning the vines is one of the most important jobs in the vineyard. Because before the vines produce shoots again, the ‘bearing or fruiting rods’ have to be decided and the number of ‘eyes’ established. From the eyes, new shoots can grow from which the grapes then grow again. The number of eyes often depends on the age of the vines, but also the winegrower’s strategy. This defines whether the focus is on the volume of the yield or the quality. Fewer fruits mean a good ressource distribution to the grapes but also a smaller yield. I work with two rods and a maximum of five eyes per rod. My vines are now 20 years old now and so not ‘youngsters’ any more. So for me: less is more. Pruning is also very time-intensive. Every vine has to be considered and worked on separately. I’ve finished three rows. 11 rows are still awaiting my attention – so still a way to go.

From Wood to Humus

The cut wood stays in the vineyard. It is chopped up and then later shredded. The material is worked into the ground machanically. This ensures natural humus formation and therefor supports good nutritional enrichment of the soil, which in turn benefits the vines. A wonderful circle. I have less than half a hectare of land. Manageable.

The soil determines the flavour

The Traminer grapes grow on the vines in the Thüngersheimer Scharlachberg region. The Dornfelder area is in the Günterslebener Sommerstuhl region. The winegrowing regions are in the towns of the same name and lie adjacent to each other. The soil changes in this region. The red sandstone foothills give way to the dominance of shell-bearing limestone soil. In addition to the winegrower’s skill and strategy and the weather conditions, the soil is the third important determinant with respect to how the wine subsequently tastes. Wines that grow on shell-bearing limestone soil are often very rich in mineral, which is caused by to the structure of the subsoil. As you move towards Frankfurt, the underlying layer of crystalline primary rock comes to the fore. Head towards Iphofen, and the shell-bearing limestone gives way to Keuper. Different soils, different tastes. Everyone’s talking about Terroir, that’s why we’re talking about Trias. We have three very different types of soil within our region: Buntsandstein, Muschelkalk and Keuper. Together they are called the “Franconian Trias”. And that is also the reason for our great variety of excellent wines.